Legal teams and law firms that find themselves buried in low-value tedious work find that a contract playbook is an essential tool to streamline the contract creation process.

When developed effectively, a straightforward and concise contract playbook enables team members to self-serve on contracts, allowing commercial teams to consult with the playbook instead of speaking to the legal department or consulting an attorney.

What Is a Contract Playbook?

A contract playbook is a collection of data targeted at standardizing, streamlining, and codifying the contract management process. These playbooks contain a wealth of information and knowledge regarding the collaboration, negotiation, review, and approval stages of contracts.

Firms use this data to empower individuals to manage critical parts of the contract process without requiring a lawyer.

They can come in many forms. However, most will be within Excel sheets or as notes on other channels, such as Google Docs, Airtable, and Notion.

The Gaps An Effective Playbook Can Remedy 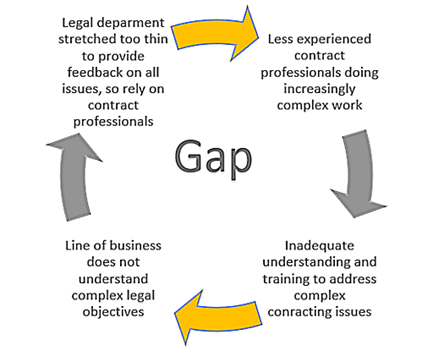 What Does a Contract Playbook Include?

Benefits of Using a Contract Playbook

Contract management brings together legal and procurement teams. That is just one benefit is using a contract playbook at your firm. Here are a few more:

How to Create a Contract Playbook

Determine how you want to create your playbook and who and how can they access it. Usually, firms keep this data on paper stored in office filing cabinets.

A digitized playbook is how firms manage this data. It provides an easy, fast, and dynamic way for users to access critical business data. A contract automation tool helps legal teams do more with improved efficiencies through automated workflows.

Use this tool to lock down clause variations, formats, and rules applied. Keep design in mind to make the data more digestible and easier to read.

When deciding how to compile your contract playbook, include all the information you intend to use for each contract. That way, you can fill in the data as needed per individual contract.

Source this data from:

Once you’ve organized the playbook how you need, consider which of your staff will require user access. Providing the information to assist them with their specific requests is essential. For your contract playbook to empower users to self-serve on contracts, design it so they can understand and find it accessible.

When creating your contract playbook, provide as much detail as possible about different rules,  instances, and workflows. It will enable you to limit risk as much as possible by eliminating ambiguity and or costly mistakes. Successful methods include templates, examples, and detailed playbook explanations to ensure that the teams self-serving on contracts know what to do and why they’re doing it for the future.

5. Set Up an Effective Training Program

Next, you’ll need to equip your teams with the knowledge needed to make the most of your contract playbook. Provide effective training sessions to ensure users understand its content and how to apply that information within with contract playbook.

Update your training regularly as the playbook evolves and adapts. The chart below discusses the benefits of an effective contract playbook training program.

6. Determine How to Measure Compliance

Now that you’ve built and implemented your firm’s contract playbook, it’s time to measure its effectiveness and how consistently the knowledge gets applied. It will require routine contract audits enabling you to measure compliance and assess whether the contract playbook is efficient.

One effective way to implement a contract playbook at your firm is by automating the processes delineated within it. Leverage technology and boost your IT infrastructure to manage digital transformation.

Using Contract Automation Software for Your Contract Playbook
There are several ways to leverage contract automation software to improve contract playbook compliance by:

Automate Your Contract Playbook with Exigent

To learn more about Exigent’s contract playbook automation solutions, contact us today to speak to one of our friendly professionals.

The attention towards legal operations has never been greater thanks to significant growth in technology and increased reliance from C-suites on their legal departments to innovate and problem-solve. However,...

Getting Started with Legal Data Analytics

Thanks to technological advances, we live in an era where data is a precious asset essential for surviving our future business world, where every expense and resource will be...

How to Choose the Right ALSP Partner

﻿﻿ How to Choose the Right ALSP Partner You know your legal department or law firm practice needs help. You’ve recently lost key members of your legal team, or...

Contract Management: How to Get to the Next Level

Download your practical toolkit and start gaining value from your contracts.